For 7-year-old Jillian Crockett, of Westminster, a tropical island vacation seemed impossible, especially considering the host of medical issues she deals with daily. But then the Make-A-Wish Foundation stepped in, proving that sometimes dreams really do come true.
“For everything we do and everything we plan, we have to consider if there is a hospital nearby, is there a doctor, and can we get to medical supplies?” Jillian’s mom, Rachel Crockett said.
Jillian suffers from a list of medical issues, including a form of epilepsy called Boose syndrome.
“She has neuropathy that effects all of her extremities and gives her burning and pain and can cause her to have difficulty in balancing and walking at times,” Crockett said. “She has neurogenic disorders and a rare and undiagnosed genetic disorder that affects her central nervous system. She gets medical care every three hours. Our lives revolve around her care.”
So, Crockett was surprised to get a call from the Make-A-Wish Foundation and learn that her mother had nominated Jillian. Then, she was surprised again when she heard Jillian’s wish.
“About two weeks before 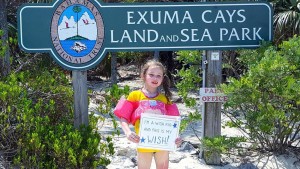 the Make-A-Wish coordinators came to talk to her we saw a video that was going around about the swimming pigs,” Crockett said. “She’d watched the video twice but never said anything more about it, so we were all taken by surprise when she said she wanted to go swim with the pigs. Before that she’d always talked going to Disney and seeing all the princesses.”

In the weeks leading up to the trip, Jillian never wavered about wanting to see the pigs who live on the uninhabited island officially named Big Major Cay in Exuma, the Bahamas. Known as Pig Island, it’s home to a colony of feral pigs that frequently swim out to meet boats, looking for a handout.

Legend says the pigs were dropped off many years ago by a group of sailors who planned to return but never did. But another story told by locals says the swine swam ashore from a shipwreck.
Crockett said the March 29 to April 3 trip was amazing from start to finish. Her husband, Dan, remained home while she and her mom, Bobbi Savaliski, took Jillian and Jillian’s 4-year-old brother, Andy. The foursome flew from Baltimore to Florida and from there to Staniel’s Cay, a small island neighboring Pig Island.

“You can walk the entire island in an hour or so,” Crockett said. We were in a tiny two-story cottage. There are only seven or eight cottages on the island. You could see Pig Island from Staniel’s Key and it was just a five-minute boat ride to get there.”
Soon after arriving, they were off to see the pigs. Crockett said a guide took them the first time, but the family returned in a boat that came with the house, driving it on their own to Pig Island and other neighboring islands.

“The pigs who came swimming out to the boat were huge sows. Jillian’s eyes got really big when she saw them coming because, they were so big,” said Crockett. Added Jillian: “Some were big and some were little. They were pushy but they were nice.”
Crockett said the guide gave them bags of food for the pigs and instructed them to feed only from the boat.

“He reminded us that the pigs are scavengers, and they’ll get the food however they can,” Crockett said. “You feed them in the water because then they can’t jump up and knock you down. If you hold your hand out and say, ‘No food’ they go away. They know.”
Jillian liked the pigs, but she liked the iguanas on Iguana Island even more. And she liked driving the boat, too. 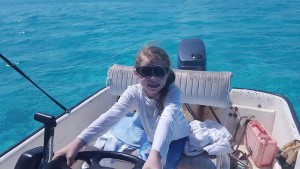 “I did good driving the boat,” said Jillian. “I went, ‘Yahhhh!’ when I cranked it up to full speed, and then I let go and it went to hardly any speed at all. I would like to go back tomorrow,” she added, very matter-of-factly.

Crockett said the iguanas were used to having visitors.

“I wasn’t afraid,” Jillian said. “One bit me when I was trying to feed the little one. It didn’t hurt. It was sort of like a nick. And some wouldn’t let you touch their tales.”
With so much to see, the Crockett family adventure didn’t end there.

“There were also nurse sharks and stingrays inside a cove at the resort. The sharks have teeth but not sharp ones,” Crockett said. “They are bottom feeders that are quite harmless. At first, Jillian was nervous about touching them, but by the time we left she was fine. The restaurant uses lobster tails and throws the rest of the lobster in for the stingrays and sharks so they come and go at will. There was a sign for us, but you went into the water on your own.”