Danielle Herrington may be a newbie, but she’s already a superstar.

The 24-year-old model is the face of the 2018 Sports Illustrated Swimsuit Edition, after being named the magazine’s Rookie just last year. Travel + Leisure had the chance to join Herrington in the Bahamas, where she partook in the popular activity there: swimming with the pigs. 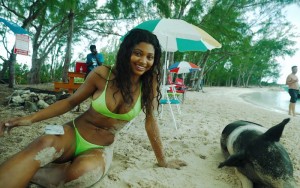 Herrington shot her cover photos with photographer Ben Watts. She is the third African-American model to grace the cover of Sports Illustrated. The first was Tyra Banks and the second was Beyoncé — two of Herrington’s idols.

“I am so excited to be part of this iconic brand that has long given identity and voice to women of all shapes, colors and beliefs,” said Herrington. “I hope that young girls who look at this cover are inspired to dream as big as I did and work hard to attain all their goals.”

The Sports Illustrated photoshoot was her first big modeling job, People reported. Before SI, she took her first walk down the catwalk in 2017 for designer Philipp Plein.

This edition of Sports Illustrated also includes a section called “In Her Own Words,” a photo spread featuring models and celebrities such as Aly Raisman and Paulina Porizkova, in which their own bodies become a canvas for a message of empowerment.