Swimming Pigs of Staniel Cay want you to join them for a pre-launch book party onboard a luxury yacht!

After basking in years of sun-kissed fame, appearing in television shows, magazines and countless social media posts, The Bahamas’ fastest growing attraction will soon be displayed in book stores around the world. 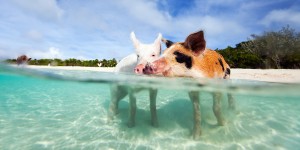 Skyhorse Publishing, an independent book publishing company that has published 47 New York Times best sellers, has will publish “Pigs of Paradise,” written by a former Business Editor in The Bahamas.

Expected to be released on October 16, 2018, the book offers a history of Exuma, where the pigs are originally from, while also chronicling their swift rise to stardom amid a viral marketing campaign that has captured the world’s attention

Pre-LAUNCH PARTY: On August 31, join T.R. Todd, the author of Pigs of Paradise: The Story of the World-Famous Swimming Pigs, aboard Impulse Yacht at the Staniel Cay Yacht Club Exuma Cay in The Bahamas to celebrate the global success of the swimming pigs of Exuma, Bahamas. T.R. Todd will have the first advance copies of the book on hand.

In recent years, the swimming pigs have been seen by millions across the globe from North America to Europe to Asia.

Already a key economic driver for Exuma, the swimming pigs have spread to other islands in The Bahamas, with the world’s fascination for the attraction only seeming to grow.

“Watching the world take notice of these creatures has been an incredible journey,” said author Jeff Todd, who writes by the pen name T.R. Todd. “It probably shouldn’t surprise me anymore, but the hype and momentum surrounding the swimming pigs is truly amazing. The contrast of the most beautiful water and beaches in the world with an often misunderstood animal has proven to be a force in the age of social media. But I think what people will soon appreciate is that the journey on how we got here is also a great story.”

Todd first took notice of the swimming pigs in 2014, when he teamed up with Peter Nicholson, the largest owner at Grand Isle Resort in Exuma, and Bahamian director Charlie Smith, to create a film on the attraction, ‘When Pigs Swim’.

The movie proved to be a hit. After touring in film festivals in the United States, often with a piglet in tow on the red carpet, the Bahamas Ministry of Tourism incorporated the pigs into its global marketing campaign. That set off a chain of unprecedented publicity. Since then, the swimming pigs have been featured in most major publications, including the New York Times, New York Times Magazine, Travel & Leisure, the Washington Post, Forbes, CNN, The London Telegraph, Daily Mail, BuzzFeed, USA Today, Toronto Star, the Globe and Mail, and hundreds of others. They have also found their way into a myriad of television shows, everything from ABC’s The Bachelor, NBC’s Today Show and even popular children’s cartoons.

“The book is about how and why they went viral, but what I love most about it is being able to provide a history of Exuma and an opportunity to stop and think about how we interact with animals,” Todd added. “It’s funny, but I want people to come away from the book thinking a bit more about our relationship with pigs, and indeed the wider animal kingdom. I think the pigs give us a unique lens with which to consider our relationship with animals. And I think this is the right time to be thinking more about these issues in a new and original way.”

‘Pigs of Paradise’ is also expected to be heavily illustrated with stunning shots of Exuma and the pigs, including contributions from top social media influencers. Diane Phillips, the founder of Diane Phillips & Associates, wrote the book’s Foreword.

“I’m very excited to see this package come together—it’s an intriguing and informative story with stunning photographs that will surely be a must-have for many, especially animal lovers and activists as well as travelers,” said Nicole Frail, Senior Editor at Skyhorse Publishing.

Skyhorse Publishing, founded in 2006, is a rapidly growing publishing company with more than 1,000 titles. It has published the works for four Nobel Prize novelists, and released around 50 New York Times Best Sellers. In 2015, Skyhorse, headquartered in New York City, published ‘The Walk’. By Phillippe Petit, about his daring walk between the NYC World Trade Center Towers, based on the motion picture directed by Robert Zemeckis. In September 2016, it released Snowden, based on the notorious American whistleblower. The book was timed with the release of Oliver Stone’s feature film that year.

Celebrities from around the world, including comedians Jerry Seinfeld and Amy Schumer, have made the trip to see the swimming pigs in recent years. ‘Pigs of Paradise’ offers the inside story of this rise to fame.

Just another day in paradise – Exuma’s swimming pigs have become an international phenomenon attracting celebrities, visitors and journalists like NBC’s Kerry Sanders who did the story for the Today show. Now a major publisher has acquired rights to the book “Pigs in Paradise’ by author T.R. Todd. Skyhorse Publishing, which published 47 New York Times best sellers including ‘The Walk’ and ‘Snowden’ about whistleblower Edward Snowden, aims to release the book on Exuma’s swimming pigs and humankind’s complex relationships with animals it adores and devours in the Fall of 2018. Photo by Charlie Smith/Earthbeat Films.